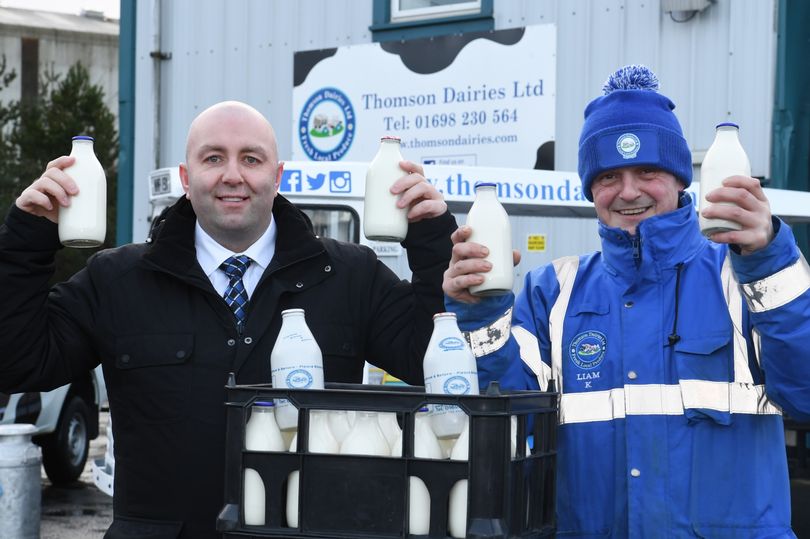 By jonathan@ninetwo.designApril 29, 2022No Comments3 min read

Thomson Dairies, who moved to its current site from Wishaw two years ago, estimate they have taken 2.6 million plastic cartons out of circulation.

A dairy has taken 2.6 million plastic milk cartons out of circulation in the past year – after taking inspiration from telly legend David Attenborough.

Thomson Dairies, which moved from its base in Wishaw to a new depot in Shotts two years ago, previously hit the headlines when it reintroduced retro glass milk bottles.

The eco-friendly firm is now pouring it on with a reusable revolution that’s really taking off.

“We are estimating that we’ve taken 2.6 million cartons out of circulation, but it could actually be higher as we’re basing the numbers on our average customer order,” said a Thomson Dairies spokesman.

“We deliver 50,250 glass bottles each week to our doorstep customers, some of which get two deliveries per week.

“That number of bottles multiplied by the 52 weeks of the year equates to 2.6 million. We’re proud we’ve been able to take so many plastic cartons out of circulation and it’s great to see so many local people get behind using glass bottles.”

Thomson Dairies insist that more customers are keen to do their bit and choose glass bottles than can be reused, rather than cartons as some cannot be recycled and all the lids end up in landfill or dumped elsewhere.

The Thomson Dairies spokesman said that there’s a spike in people being pro-active over their waste, thanks to eco champions like David Attenborough.

The spokesman said: “After watching TV programmes like David Attenborough’s Blue Planet and also reading articles about plastics ending up in oceans, and harming wildlife, consumers are more conscious and want to play their part to improve the situation.”

William Thomson, managing director of Thomson Dairies, said: “We are happy to see the continued shift back to traditional glass bottles of milk from consumers, who are more and more concerned about reducing and cutting down on single use plastic.

“We have converted customers to direct debit payments to reduce our carbon footprint, along with converting to using electric commercial vehicles.”

Thomson Dairies deliver milk across the area in the washable, re-usable glass bottles, which aren’t available in convenience shops or superstores.

The glass bottles are then collected from customers’ doorsteps, returned to the dairy farm, inspected by farm workers and machinery, cleaned and treated and reinspected before being refilled. The company has also been serving customers in Aberdeen after opening up a new depot up north.

The charity Surfers Against Sewage is currently running a Plastic Free Coastline campaign to help rid our waters of plastics, and its leaders insist that single-use milk cartons are one of the biggest problems.

Louise Edge, from Greenpeace’s ocean plastics campaign, said: “Replacing single-use plastic bottles with glass bottles that are designed to be collected and re-used over and over again is a great move.

“It will not only help prevent plastic fragments ending up in our soil, rivers and oceans – but embracing re-use also helps to save precious resources.

“Greenpeace research shows that plastic milk bottles make up a significant amount of the 900,000 tonnes of single-use plastic sold by supermarkets last year, so switching to reusable milk bottles is a great way of helping the UK kick its plastic addiction.”

Trustpilot
We use cookies on our website to give you the most relevant experience by remembering your preferences and repeat visits. By clicking “Accept All”, you consent to the use of ALL the cookies. However, you may visit "Cookie Settings" to provide a controlled consent.
Cookie SettingsAccept All
Manage consent

This website uses cookies to improve your experience while you navigate through the website. Out of these, the cookies that are categorized as necessary are stored on your browser as they are essential for the working of basic functionalities of the website. We also use third-party cookies that help us analyze and understand how you use this website. These cookies will be stored in your browser only with your consent. You also have the option to opt-out of these cookies. But opting out of some of these cookies may affect your browsing experience.
Necessary Always Enabled
Necessary cookies are absolutely essential for the website to function properly. These cookies ensure basic functionalities and security features of the website, anonymously.
Functional
Functional cookies help to perform certain functionalities like sharing the content of the website on social media platforms, collect feedbacks, and other third-party features.
Performance
Performance cookies are used to understand and analyze the key performance indexes of the website which helps in delivering a better user experience for the visitors.
Analytics
Analytical cookies are used to understand how visitors interact with the website. These cookies help provide information on metrics the number of visitors, bounce rate, traffic source, etc.
Advertisement
Advertisement cookies are used to provide visitors with relevant ads and marketing campaigns. These cookies track visitors across websites and collect information to provide customized ads.
Others
Other uncategorized cookies are those that are being analyzed and have not been classified into a category as yet.
SAVE & ACCEPT